We offer some product lines through various online retailers:

Take a look at our presentation, ‘Radiant Heat Saves Lives,’ from the Design Outdoors Canada show, March 22 & 23 in Toronto Canada which we attended with our Canadian distributor, Power Plant Supply Company. 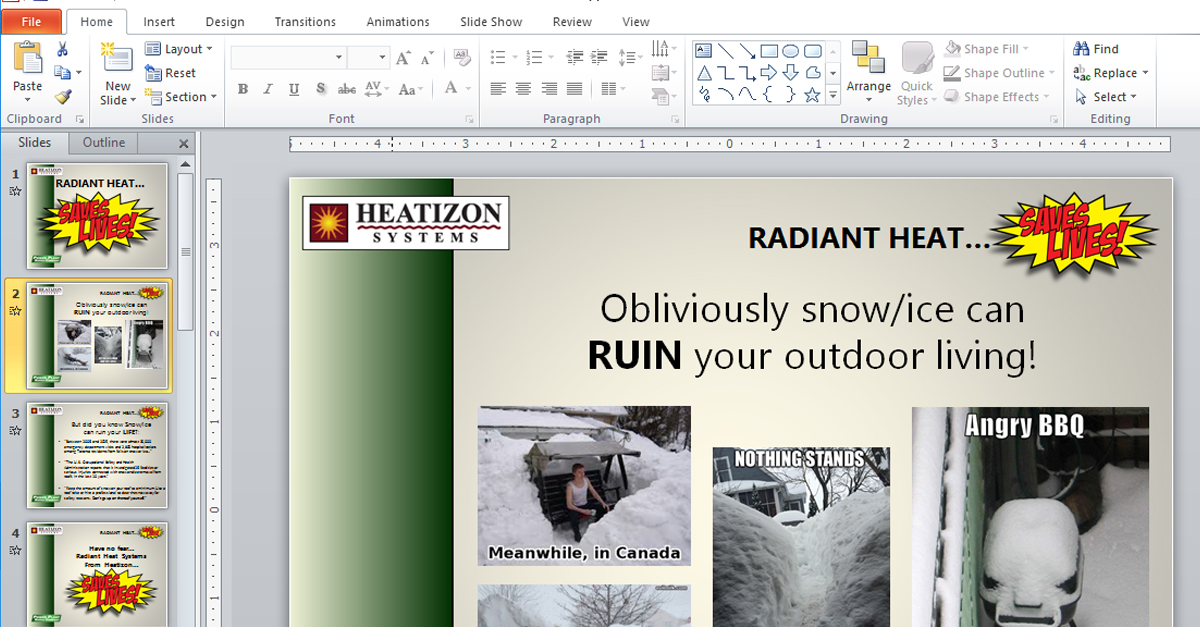 The 5 zone system will provide snow melting for the entrance and walkway, totaling over 1,400 square feet.  The system, designed by Cy Sherwood of WarmQuest, is installed on 6” x 6” x 4” gauge remesh with elevated chairs in new pour concrete.

The Islip Public Library serves approximately 19,500 residents, according to Lauraine Farr Kindler, the Senior Librarian for the facility, and had a total circulation of almost 250,000 items last year.

By Ann Robinson and Annie Schwemmer

Snowmelt systems are designed to take the sting out of Utah winters.

Last week we discussed a permanent system to keep snow and ice off your driveway. The system, which can be expensive, features electric cables or hot water pipes running under your driveway.
Today we’ll discuss some other options that may add convenience to your winters without sending you to the poor house.

The first option is to use an electric cable system, but to install it judiciously, heating only critical areas. For instance, instead of heating an entire driveway, you could heat only narrow strips corresponding to the wheel base of an automobile.

This would allow vehicular access in and out of a garage without having to shovel the entire area until a more convenient time. 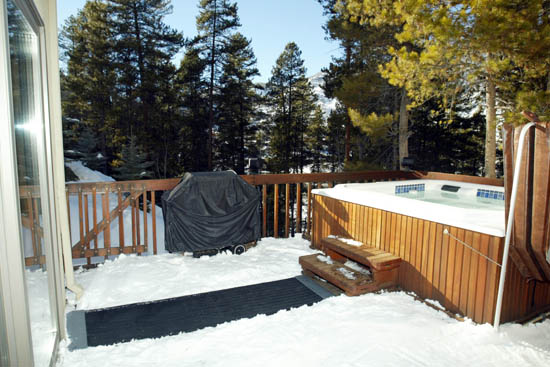 Portable heated walkway mats are one of the less-expensive options for melting snow and ice.

Perhaps you are concerned about the safety to the walkways around your home. Portable snow melting mats are one solution. The mats are designed to lie on top of existing surfaces as opposed to being imbedded in the walkway. The electric units can be placed in any area where snow and ice accumulate and work on the same principle as other snowmelt systems, continuously melting snow as it comes in contact with the warm surface.

The mats are manufactured with an electrically operated heating element sandwiched between two protective surfaces of nonslip rubber. They are durable and provide a much more secure footing for pedestrians. They are not appropriate for use in driveways.

Portable snowmelt mats operate by plugging them into any outlet. They come in either 110 or 240 volt options and in sizes ranging from 2 feet by 3 feet up to 3 feet by 25 feet. Several mats can be hooked together to achieve a configuration to suit your situation.

Snowmelt mats come only in black, but there is another option if you already have a mat or outside rug. You can purchase an underlay mat that functions the same way as a snowmelt mat, but it only features a heating element without the rubber surface.

Stairs pose another concern. Electric rubber treads have the same slip-resistant surface as the mats but are sized to fit one to a stair tread. Sizes range from 9 inches by 2 feet ($125 each) up to 11 inches by 5 feet ($205 each). The treads are wired together and operate from a single plug.

There is also a more permanent (though pricey) solution to icy stairs. Heated aluminum stair treads can replace the steps of an existing stairway or be used in constructing a new exterior staircase. These range in cost per tread from $255 for a 9-inch—by-2-foot tread up to $510 for an 11-inch—by-5-foot tread. While the aluminum option is permanent, the mats and rubber stair treads are seasonal — just roll them up and put them away in the spring.

Portable snow mats and stair treads come with the option of automatic moisture and temperature sensors so they can respond automatically to the climate if you are not home to plug them in. They offer the same convenience and safety as a full-blown snowmelt system without melting away all your funds.

There’s nothing like a hot bubble bath on a frigid winter’s night. And, nothing snaps you back to reality faster than stepping out of the tub and onto a cold tile floor.  These days, fewer people are experiencing the discomfort of cold feet. That’s thanks to floors being warmed with radiant heat.

A room at the Old Waterstreet Inn, at 217 W. Boscawen St. in Winchester, with heated tile floors in the bathroom, is especially popular in winter, innkeeper Jeannie Faith said.

“They love it,” she said. “It’s very nice when you step in in the morning or the evening, and it’s warm under your feet. It’s very efficient. It actually helps with the heating bills to have it. We’re actually considering building a house in the next five years, and we will definitely put the radiant heat in when we build.  “It gives a whole coziness to the room that you don’t have otherwise.”  Faith and her Norwegian husband have a cabin in Norway with radiant heat in the bathroom and kitchen.

“In Norway, they would never put a tile floor down without radiant heat,” she said.
WarmQuest, based in Salt Lake City, sells two types of radiant heating systems, Tuff Cable and ZMesh, said Ryan Bench, the company’s Web master.  ZMesh is a 12-inch-wide bronze screen heating element that is no thicker than screen-door material, he said. It can go underneath carpet, hardwood floors and tile.  The Tuff Cable is for tile and cemented floor coverings and causes a little floor buildup, Bench said.   According to heatizon.com, Tuff Cable uses a 10-gauge coated copper cable. Heatizon manufactures Tuff Cable and ZMesh.

“All the power that goes in, goes back to the transformer and makes it pretty much a loop.”
Both of WarmQuests’ systems are low-voltage, he said.  “It has a step-down transformer with a control box that converts high-voltage to low-voltage,” Bench said.

About 12 to 15 volts are put out per square foot.  Putting in radiant heat is popular in remodeling jobs, Bench said. The company also uses it for de-icing and snow melting in roofs and driveways. The Tuff Cable goes in driveways and ZMesh under asphalt roof shingles.

The spaces they are used for vary. “We have systems for small bathrooms 110 square feet and less,” Bench said. “We also have systems for as big as you want to go. Some people put it in their entire house for their primary heat source. Some people supplement their heat source with it. A lot of it’s new construction as well. It’s starting to get really popular.“It’s economical to run, depending on what your kilowatt hour rate is. [It] usually cuts down on utilities, especially if it’s supplementing the heat source.”The larger the area of the house being heated with radiant heat, the cheaper the square-foot price, he said. For instance, a 110 square-foot bathroom might cost $10 to $12 per square-foot, compared to $8 per square-foot for larger areas.A different style of radiant floor heat, hydronic radiant heat, is used by Whittington Construction Co. in Front Royal. Water is used either from the home’s hot water heater or a separate boiler system, Steve Whittington said. It runs through tubing in the flooring.

He said this system has been installed in two or three of the custom homes the company has built.  “It’s just coming to this area,” Whittington said. “It’s been slow-moving up here because the cost is quite a bit more. It’s the initial installation cost.”

He said the system was installed throughout an entire house that had concrete floors, while another house just had it on the first floor, in the great room, kitchen and bathrooms.

“The one that I’m working on now is going to be in the bathroom, kitchen and eating area,” Whittington said. This latest home has piping that’s already integrated into the subfloor when the panels are bought. It is known as warmboard, Whittington said. There are several benefits to radiant floor heat, he said. “When you get up in the morning, if you have hardwood floors, or if they’re [a] non-carpet surface, these are really more comfortable, and really, it’s more even heat,” Whittington said. “Radiant heat heats up the whole mass, and it radiates from that point to heat the entire mass up. With forced-air heating, you have hot spots and cold spots.”

UL was established by insurance underwriters to find ways to reduce unsafe hazards in the marketplace, thereby reducing dramatic insurance claims. Since its inception, UL has, been involved with writing standards of safety acceptability in the United States. They have been one of the premier developers of safety standards but they have not been the only group to write standards. Groups like NEMA, IEEE, and ANSI have also contributed to the development of standards. Similarly UL is not the only independent testing laboratory.

OSHA has become the certification agency for independent testing laboratories in the United States. A group of engineers who decide to do testing as a business must qualify through OSHA to function as an independent test facility. Further-more, they must show competence in specific areas, fire testing, for instance. Once they have demonstrated competence in the area of fire testing and have shown that they possess the facilities and equipment to do fire testing, OSHA will certify them as a Nationally Recognized Testing Laboratory (NRTL) to do fire testing. Factory Mutual, FM, is one such NRTL for fire testing, Southwest Laboratories is another.

Many independent testing laboratories have NRTL status. Most are relatively specialized and limited in their scope. The three major testing laboratories that operate in the United
states that have a wide scope of testing qualification are, UL, CSA, and ETL. They are certified by OSHA as NRTLs.

NRTL status tells all customers that the services performed by these companies, to list or to label products, is reliable and legally binding throughout the United States. ETL, originally known as Edison Testing Laboratories, is an old, respected, nationwide testing group with credibility equal to UL or CSA. Therefore an ETL listing label is legally binding nationwide and should instill equal consumer confidence in the manufacturer that they have cared enough to submit their products to the rigorous safety compliance process and achieved the right to apply a Nationally Recognized Testing Laboratory label that certifies compliance assurance.

Damage caused to buildings, people and property by snow and ice build-up and removal, ice dams, and icicles amounts to millions of dollars each year. The effectiveness of the methods historically used to manage snow and ice related problems has been spotty at best. The traditional methods used to prevent these large dollar problems fall into three categories: “Icicle Management”, “Water Channeling”, and “Elimination”. Each of these three categories traditionally includes one or more of the following approaches:

Icicle Management – This category encompasses those efforts designed to eliminate or otherwise manage the icicles along the eave line and do not attempt to address the causes nor problems resulting from ice dams. Traditional methods used to manage icicles along the drip-edge of the eave include: nothing or the “ignore them and they will eventually go away, hopefully before something or someone is damaged”, approach, labor intensive and dangerous manual removal, and expensive and often times cosmetically unattractive high voltage cables or hot liquid tubing sandwiched between two layers of metal.

Elimination – This approach is designed to eliminate snow and ice from both the roof in a manner that reduces or entirely eliminates icicles from the eave edge and eliminates the potential damage caused by ice dams. Historical experiments designed to eliminate snow and ice from the roof included partially effective and prohibitively expensive experiments such as heating the attic space and attaching hot liquid filled tubing to the underside of the sub-roof. Unfortunately these experiments most often result in exorbitant energy costs and many times contributed to and/or intensified the problem originally targeted for solution.

Heatizon Systems’ patent pending radiant roof snow melt and deicing products are the only products available today that are installed on top of the sub-roof and below the roof covering material and designed to eliminate snow and ice from the roof and manage the icicles along the eave edge. Period!